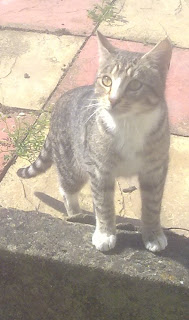 Luckily I didn't have to get up for work today! I didn't quite know what I was going to do, I started cleaning the kitchen after I let Obi out. He was out for hours this morning! I was planning on meet Sofia at some point, didn't know we were going to do what we did, but I'll get to that later! Whilst Obi was out he'd found a new friend! A beautiful little girl cat, she didn't have a tag so I don't know her name. but she is cute! Such a floosy as well, you know that noise that girl cats make when they trying it with a boy cat, she waas doing that, and rolling on the floor in front of him! She was trrying it bless her, don't think Obi knew where to look, he is a gentleman you know. Even if he does scrap with big cats sometimes. Eventually I got him to stop flirting and got him in, and she sat right out by the window and meowed and meowed until I went out!
Anyways Sofia called me, and said her and her man were going to his friends house for a BBQ, and he'd said I was invited as Sofia's always talking about me! But when Sofia came to meet me we had to go get the food! Fia got her friend to come pick me up and dropped us to Morrison's to get some BBQ stuff. We weren't there too long, managed to get all the necessary BBQ stuff, a few disposable BBQ's and some more food!  After we'd paid for everything Fia decided to go back and get some more ribs, I waited outside to have a fag. Whilst I walked out there was some guy trying to flog windows, I told him, slight problem with that, I don't own a house, I told him I didn't think my boyfriend would appreciate coming home to see I'd changed all the windows! When Fia was out we then set off to their friends house!
I felt like we were walking for ages but it really wasn't that far. Soon as we got there the boys started the BBQ, in their "ug make fire" man ways. don't know what it is with men and bbq's! They all get a pair of BBQ tongs in their hands and all of a sudden they are the worlds best cook! Me and Fia set up plates and she peeled, chopped and cooked the onions, I can't do that, chopping them always makes my eyes water, I've tried everything people say to make you not cry, it nevers works!
It was good anyways, we all ate far too much, music and drinks were enjoyed, I can't say I didn't feel bad sitting in a friends garden in the sun with a drink and nice bbq when mi man was at work, I did feel a bit guilty.
Mi man came to meet me there after work but he didn't stay long as we had to go to our friends as it is her birthday today. Lots of Birthdays in April! We had to go home first and get her presents I'd left there, and Obi's girlfriend was Still in the garden, Obi was in the kitchen too just watchin her! So I opened the window and she came up to say hi. Obi was a good boy and he didn't go out! We moved her out and closed the window ( I did go outside to give her one last stroke as she is so cute!) and we set off to our friends!
It was really good to see her, and we had nommy birthday cake too! It was really nice! We watched the new series, think its called the Waking dead, the walking dead? something like that! It was really cool! All zombies running around eating people! I was giggling most of the way through and saying "BRAAIINS!!" In the most zombie-like voice I could! Ha it was funny. Can't wait to watch the next episode!
When we got home, we found Obi's girlfriend still in the garden! It had been raining and she'd stayed there, in the rain, how cute! I opened the window to say hello, and she was all soggy, bless her heart! I had to leave her cos she wouldn't ever leave if I kept stroking her! She was out there a little while after we were in still. I said I want to keep her! Mi man then said, "How would I feel if someone took Obi?" It was a good point!