My tutor was soo funny this morning! As soon as we were all in our room he said we had to do key skills, everyone moaned and groaned about it. He asked us to get a pen and paper and go to the reception, which I thought was quite odd, but I thought maybe we were getting the results back from our exam last week. So we all followed to the reception, where our tutor did the register, then he said, " Right, about this Key Skills... April Fools!" and walked out! Cheeky guy fooled everyone! Ohh it was funny!!
So couldn't focus most of the day, don't know why. i just sat staring at my sketchbook most of the morning! It was only when Sofia came to see me that I actually got some motivation to get some work done. She sat with my class friend round the corner and he taught her how to do 3D Graphic Animation on his laptop, don't know how much of it sunk in though! Fia offered to take me home, as we didn't have art history this afternoon, and I really couldn't focus I thought I'd just get back and chill out for a bit. Fia dropped me off and I got lookiong for something to wear tonight. We were off to a friend of mi familys house for a birthday party, didn't wear anything special. Just as well as it turns out it was more of a film night than a party,first they watched some crappy film, then Toy Story 3, the night was a bit dull at parts. Then at one point Batty offered to come with me and pick up Sofia so she could come and join in the festivities with us! Was more fun driving to go get her.Well, til she got there anyways! We watched Despicable Me after we got back, again. Was really funny, as my dad had never seen it before he was giggling like a big kid! It was brilliant!
Ohh my days, I really wanted to get the colours done on my tat this afternoon but mi brothers mates have just got back from their holiday so he wanted to go and see them, fair enough really, can do that another day!
1 comment: 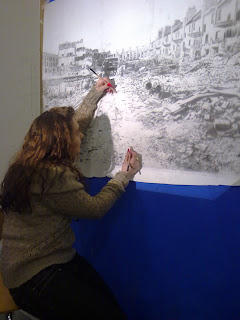 Today was such a good day for me, after a long few weeks my drawing was nearly finished, I spent the majority of the day making sure I'd finished my drawing, final touches took a lot longer than I expected. My hand started hurting so much after weeks of drawing allday I decided to use both hands! Apparently I am ambidexterious!
I don't know why some days everyone wants to play around and have a laugh, today was one of them. It was brilliant! Until I peeked at the register and realised how many weeks we got left, not many! We got next week, then 2 weeks off for easter, then a couple of weeks, then a half term, god knows why! But all in all we only got about 6 or 7 weeks left before we have to clear out and set up for the end of year show.
Still in pain but thats life, will be making sure I try not to fall over again, unless I'm too drunk to notice!

Tired as usual I dragged myself out of bed to get ready for college, so didn't want to get out of bed, my knees are trying so hard to heal I can hardly bend my legs, was considering not going in today its that bad. My boys were being particularly noisy this morning! I think they know its going to be summer soon!
Not much to report today, Was really hard  to focus hobbling around doing a penguin walk! Haha, my tutor was sweet though, I told him I'm going to be walking like a spanner today, and he said, its good to walk like a spanner sometimes, its grounding! Then he said we should all have a walking like a spanner day. That was cool! I'm really going to miss college so much!
The day went on and soon Sofia txted me and said she'd come and meet me in a bit, so I got on with my work, thinking I'm going to have to get on with finishing my work before Sofia came to meet me. Then I got told that we had a student rep meeting over lunch break and that I needed to get opinions of my class mates of anything they want changing. Don't know why they think we should do that now as we only have a weeks left.
But anyway, the meeting started at the beginning of our lunch, 12.15. We met the woman who'd came down from Dover college to run the meeting, and she told us how the meeting was going to be carried out. Instead of us bringing up points and asking if anything could be done about them, she asked that she could follow her plan of a group of questions she wanted us to answer and then if our points fitted in with them then we could bring up them up. We went through everything, from security in our campus to equality and how well we feel our tutors perform. Ohhh it was tedious, was alright when it was something that was relevant, and the majority of the time it was just me and one guy answering all the questions. But it was good to feel like we had an input. I just hope it makes a difference. It was 20 to 2 before we got outa there! Sofia was at the window of the door pulling faces at me about half way through, think I think she went downstairs to annoy everyone.
When I got out of there I went to see my tutor to tell him it was done and I was going to get some lunch real quick, me and Fia went out for a fag, grabbed some food, and I got back to finishing off my drawing, Started it about three weeks ago, pretty sure I'll have it done by tomorrow.
Around 2 half 2 Fia said she'd have to be getting back to pick up her mum form work, and she'd offered to take me home so I didn't have to walk with my poorly knees. Which was lovely of her. So we set off home, we went the long way home to see whats about, not a lot as it turns out.
I got home and had to put my feet up and rest my knees. Big wuss I know but it really hurt. Soon enough mi man had finished work and we set off to our house, via the walk in centre so he could have a check up for his poorly sickness, we are a pair at the moment. It was funny, there was a few normal people, and one particularly moody looking teenager, she seemed like she had a serious problem realising there was more important people in the world than her, and appeared as no one had ever told her otherwise! People are funny!
On the way back mi man treated us to a lovely macd's and we watched no ordinary family. I wanted to go to bed early, never happens!
No comments: