Fia came to meet me at mums when I got to Ashford this morning, we still managed to pass her on the ring road though, that was funny. We had to go to the hospital for a blood test first thing in the morning, I came to hold her hand. That was done pretty quickly so we were back to college before 10. As I finished my drawing last week I was a bit lost for what to do now, I decided to etch a plate to make a print from a small section of of my drawing. which was still stuck to a wall so it was hard work to make the plate stay stuck in place, it was really bugging me!
By the afternoon my hand was killing me from etching too hard, I so wanted to go to sleep!
No comments: 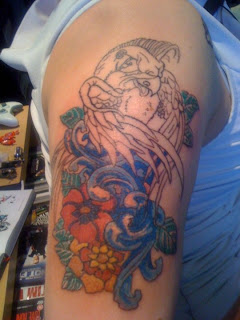 Oh my god what a busy day! Got back to mums bright and early, waited a little while until the rest of the world woke up. Then got to work, lots of moaning but I think we got more work done this morning in 2 hours than we got done in 4 yesterday! Don't know how that worked, cheeky monkey was trying to test me on a few things today, I had to tell him, I don't need tutoring thanks, if I did, I wouldn't be tutoring him! that was funny, he told me I don't know how to spell every word in the dictionary, so I said not being funny, pretty much, I do. then he said, ok spell something in tukish then!! Funny guy I said, "How has that got anything to do with English?" It hasn't! Then he told me to spell a word that is actually German! Oh I laughed, bless him, that's why I'm working with him though, I've got the gift of patience that not many people have to the levels I've acquired. I love it. I think his mum would have killed him if she'd sat and tried to work with him for that long!
When it was lunch time I went back to mums to meet mi man on his break. Then I got up to the studio to crack on with my sleeve tattoo. Luckily Sofia came to hold my hand for a little while, that was nice. I picked the wrong day to do this as I knew I was going back to Capoeira tonight, really missed it and my friends and my instructor have been nagging me to come back for ages now. So Fia came with me there too for moral support, and it was so fun! I missed training a lot but I still can't help but feel like it's a lot different than how it used to be. I miss the good old days more! Really want to get back on track though. After class Fia drove us over to our mate chippys house to meet everyone there, and we watched a few episodes of black books! I love it, its so funny. Didn't get home until gone half 10, college tomorrow! Yay.
So knackered!
No comments:

What a day, tutoring was not something I was looking forward to today. I love doing it but it would be so much more fun if the boy I'm working with had a bit more motivation. Its hard because I really want him to do well, but its like people always say, you can't help someone unless they help themselves! He wants to do well I know he does, but until he realises he's got to put the work in to see a positive come back, he's not going to get very far, unfortunately. I can see a lot of myself in him sometimes, I never focused too much at school, and I just assumed that I'd find a way into something I enjoyed. But it never happened. Now I'm back at college trying again to get an education to get a decent job. I don't think if I knew then what I do now I would of messed about like I did. But he's got a chance to change, but like me, I think he's not going to realise it until its too late. So we spent most of the morning with him trying to talk his way out of doing some work, it was only when I said, look, I don't want to hear it, write down anything you're going to say, and I'll read it later. I really don't like being harsh with him but its the only way I can get him to do anything.
We had a break for lunch and got right back to it, for some reason, even though I was there for nearly six hours, we only got about four hours of work done. There wasn't really a lot of work to show for it either. I really want him to do well for himself.
I just went to sleep on the sofa when I got home, mentally drained!
No comments:

I do love Sundays, one of the only days of the week I don't feel guilty having a lie in. Mi man was up earlier than I noticed. I don't know why anyone gets up before 9 o clock on a Sunday, its madness I tell you! Fair enough if you have dogs that need walks, or if you've got to work, or a plan to go out somewhere exciting, but for a lazy day chilling out, why get up so early?! Anyway, I had my lie in and mi man mad me a lovely bacon and egg sandwich in bed. Loved it! I tried to get ready, slowly seeing as it was one of the few days I wasn't being rushed out the door by a certain someone!
We went to visit his brother, and sister in law. They're cool. They'd been looking after a briefcase for him, but the dozey sausage couldn't remember the code! I decided I'd have a crack at it, I was told it had a 7 in it! Well that helped, not! After about half an hour and systematically going through every combination with a 7 I realised that it obviously didn't have a 7. So I started again from 001. Oh my days it took a while, I'd sat there for so long trying every different number that when I cracked it I nearly jumped out of my skin! I was so proud of my little self, and I'll tell you what, I'm never going to forget that code now! not telling though, haha!
We then set off to see bear, t, and the pups. ohh they are sweet! We sat and chatted for ages, well the boys talked about crap and me and t pulled faces at them being boring! Bless them.
I need to stay on track with my blogs so I don't forget what I'm doing everyday!
No comments:

I had a cool lie in this morning, couldn't stay lazing too long as we had to get out and get on our bikes!
We got to mums right on time, for a change we weren't late! We left with everyone in their crap hats, I'm too cool for a crap hat, I just won't be falling off anytime soon! I hope! Me and dad- as usual- went tearing off in the distance and left mi man and mum straggling behind, they love it! It was a really nice day, summers definitely come early this year!
First stop was at the Good Intent, in Aldington Frith. Sat Nav said otherwise apparently to others that came to meet us there in their cars! So met up with a few friends in the pub garden when we got there, I found  a little ladybird friend, that was cool! I like ladybirds, they are definitely my favourite bug type creature.
We had a nice lunch, a bit filling for a cycle ride but I know now not to have sausage and mash when I've got to cycle home! A few malibu and cokes later we said our goodbyes to the drivers and set off to our next destination, the Farriers Arms. It was old!! Was like we'd travelled back through history a few hundred years!
There was a little pup with a man inside by the bar, she was so adorable! Should of taken a picture of her she was beautiful! Again we got our drinks and went and sat in the garden, this time dad thought it would be clever to check the map for the quickest way home. Good plan! We had a laugh at some normal people, I went off to play with some littuns across the field. Came back knackered from running around then had to get back on my bike to get home. It always hurts more getting back on.
On the way back we passed a field with an obvious foot path through the middle, all we had to do  was chuck our bikes over the style, I really wanted to go that way as it would have cut out having to cycle right around the sides of this field, bit no one else was up too it, and I didn't want to go on my own. Next time I will though! We went across one of the busiest roads in the town on the way back, and stopped in Macd's for a mc flurry pudding, was very nice, would of been better if they'd put more than three poxy smarties in it!
We stopped at chippys for a quick cup of tea, and set off home. This was the easiest part of the journey as it was right by my sisters old flat, I used to cycle that way all the time to go and see her.
We got back to mum and dads and got the bikes back, and set off back home via Sainsburys to get some food. All good fun! We had a pretty uneventful evening after that, just relaxing our poorly legs after a long day.
No comments: