After a long day and a late night last night I really didn't want to get up today! When I did I had to get ready pretty quickly as we were off to mi mans parents for dinner, I love going to visit them. Its funny to see where mi man gets some of his traits from. Shouting at inanimate objects seems to run in the family! Sorry guys. I didn't laugh at the time but its pretty funny now.
It was a lovely day with them, after I dragged mi man away from watching football in the other room! I didn't really mind though, I was watching the Olympics with his parents and asking mum random questions about the pole vault!
On the way home we collected Sofia from her friends and we headed home to chill out for a bit. Well me and Fia did anyways, he went off to his mates to watch the second half of the match. All good fun,
Me and fia were having a laugh as usual, playing xbox and stuff. We didn't really do much the rest of the evening. Was still fun though.
No comments:

Saturday 5th March 2011- Lie in, Walking and even more Drink

After a nice long lie in and a play fight (getting bitten and pushed out of the bed) I got up to have a bath before we figured out what to do for the day. shortly after getting out of the bath and getting ready I got a call from my dad saying there were on their way up to go for a walk, which I 'd almost forgot was suggested yesterday. Soon enough the parents were round and we were off on a walk to town, but apparently no one had told mum we were walking, and she'd worn her heels! With the boys marching off into the distance me and mum joked that they had the beer-dar switched on and they weren't going to wait for us!
A drink at the guildhall and we were off to Chambers. I like it in Chambers more than most places. We'd got our drinks and sat down when I realised someone had bought a magazine over with mi 'old friend' Ellie on the cover! What bugged me about this was we were all very supportive of her career when we used to train Capoiera together, then it was like as soon as she got one song released she forgot about all of us, even a little message to say how ya been woulda been cool, but no! I wish her all the best but I won't be thinking much about that 'friend' anymore.
After we'd finished our drinks we had to dash home as mum was off out to her friends house to watch movies this evening. As dad decided that he was going to mi man thought he'd be sociable also. Being allowed to go out with friends is a concept he wasn't used to in past situations. But i digress, with him off out I had the chance to go and catch up with some of my friends.
I spent a long time on the phone to a very close friend I haven't really had time to talk to for a while, we used to talk for hours everyday. now things have changed its good to talk when we can. Then I was off to mi friends to hav a few drinks and a chat about life. We started watching the film, Shutter Island, I really wanted to see the end but I had to leave when mi man got back. Was a really nice day still.
No comments: 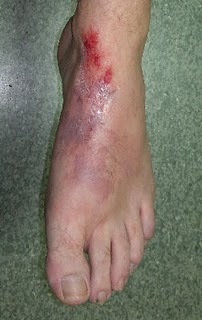 After being told yesterday that we had until next week to finish our work, I was most shocked to be told we had our group critiques tomorrow! I'm sure I'll get my work done in time. I spent most of the day finishing my sketchbook. So much fun, and finalizing all my practical work and making the most of chilling with my friends at college. We had such a laugh. Was one of those days that I'm sure we'll all remember for a long time. Is realy starting to hit home that we haven't got much longer together now we're all having interviews and getting offers for university. I'm going to miss them all so much! We were playing with clay and throwing it at the wall to see what bits would stick, I couldn't get it to stick! I think it was where I was sitting. My buddy jj thought it was most hilarious to wipe his clay covered hands all over my face, we did laugh, cheeky bugger I'll get him back!
In our tutorial this afternoon we talked about student finance for uni. Which was a big headache unless you happen to be ok with Maths. It was said that unless you've been living on your own for more than three years you will still be assessed on your parents income, so I won't be getting many grants. Grrr face! We also spoke about the costs of the course, if we enrol this year the whole course will be on that same amount of fees. At the moment in 2011 this is capped to the highest charge being 3,375. But if we enrol in 2012 the costs will go up maybe to as much as three times more! This means that if I stay at my campus and do a higher national diploma I will have to re-enrol when I do the BA top-up year in 2014, which would be in the higher course fee rates, this one year could cost more than doing the whole HND. (Higher National Diploma) This is all stuff I will have to seriously consider before I make my decisions. I'm not going to reply until I have all my offers back. I wonder if they'll all be as difficult as the offer I've got!
This evening I spent well over three hours on my coursework, I flicked though my sketchbook assuring the majority of it was in order then spent the rest of the time writing my evaluation. I really don't know how it ended up being three pages long! I did enjoy this project a lot! After smiling sweetly at mi man to read my evaluation to check it made sense I had a lovely relaxing bath, and went straight to bed. Really should get this blog back on track now.
No comments:

Wednesday 2nd March 2011-Back to College

Half terms suck, I may have said before but holidays aren't really holidays anymore, even if I can't do any work I'm still thinking about it, still got to make sure I know whats got to be done. Got loads to do still but I wanted to do it while I was at college, not when I was supposed to be on a break.
Back at college bright and early I was informed that we had until next week to finish our projects, bonus!
I set about getting a functional piece of work made, as the project brief said should be done. Only a simple thing, but functional none the less.
It should be mentioned now that I don't like sowing, having not done it for a long time, I'm not particularly good at it either. so why I chose to make an embroidered pillow I don't know. It was a mission and a half. (3D Sculptural Textiles is a lot harder project than I 1st thought it would be!) I attempted to sow some writing on by hand. Which didn't work at all. Then I went to the fashion students room to borrow a sowing machine.Somehow I managed to brake two of them! Think they fixed them now! It was funny all the same, my tutor came up to see if I was ok and the fashion students said they were looking after me! That was nice of them!
Once I realised this really wasn't working one of the fashion students told me to try using a fabric adhesive called wonderweb. It is effectively double sided sticky stuff to iron fabrics together. I simply had to cut the letters out of one fabric-when it had wonderweb on the back, and iron it onto the pillow fabric. Sowing the two sides of the pillow and stuffing it was so easy compared to this tedious ordeal of the lettering! Going to try to sow things more often I think.
Just after break this morning my friend Kaytee (yes thats how she spells it) came to me and said something had changed on her ucas (university) application, and had I had that email too? I had but I didn't think much of it at the time, I figured that if I'd had an offer for an interview the university would have emailed me. She told me to check it because that meant I may have had an offer, and they don't always send an email, they sometimes just do it through the ucas site. So I ran up to the computer room, logged on and into the site to check if any of my options had changed. They had! The one course I really had my heart set on said I had a conditional offer, already! I haven't even had an interview! I was so happy!
Then I got to the conditions. One stated that I had to finish my current course with the grades Distinction, Merit, Merit. (which I believe to be on the path for already) Two was that I have pass Key skills level 3 Communications, they only do up to level 2 at my campus which means I'll have to find somewhere else to do that. My tutor told me that people doing this on an A level course would have spent a whole year studying and doing their portfolio for the exam. Not too sure how I'm going to manage that. My first offer was still very exciting! I called my nan I was that excited, and she likes to know whats going on for us as we don't see her very often. She sounded very happy for me, although I'm sure she won't remember what the course is called for very long. In the mean time I texted my brother and a few close friends, the funnyiest text I got back (along with a lot of well dones) was from my brother, it just said "Geek!Xx" Cheeky sod. Less than a minute later he'd texted me again saying he was only joking and was very happy for me! Over the frickin moon!!
Having spent most of the day faffing around with fabric and with all the added excitment I couldn't wait to get home and go to sleep. But we wanted to pass by Bear and tea's for chats, and to be more excitable. The boys went off out to get us a KFC, as me and tea both had things to celebrate. I was so tired when we left I don't know how I stayed awake so late.
No comments: