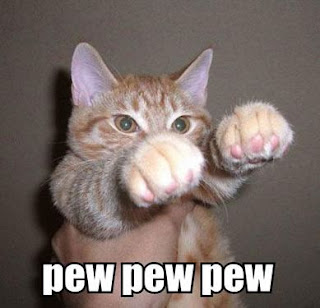 I had a cool idea today, I wanted to make a big drawing of a post Apocalypse scene, with lots of destruction, ruined buildings and people in despair. Was a bit depressing really so I printed off some pics of cute cats to cheer myself up. I loved this one!! Cats are cool!
I spent so much time looking at sad pictures this one really cheered me up. As it was such a big piece I chose to do, I thought to use a projector to make life slightly easier for myself. It didn't really make it easier at all as I had to print off lots and lots of pictures, get them down do size in the photocopier then photocopy them onto acetate paper (see through stuff). Next I got to use the lift, to get a projector down from upstairs, I had to borrow my friend Jj for assistance, apparently I was too small to work heavy machinery on my own,lol! Then wen I'd set up that I had to align the smaller images onto the acetate image of the back ground on the projector and then stick up a massive sheet of paper on the wall and draw onto that! I swear the next person who knocks that projector out of line or thinks they're being funny putting their hands in front of it when I'm trying to work is going to have their fingers broken!
So anyway, I did spent the majority of the day running around the college playing with the photocopiers and lookin for our technician to get me more acetate paper from where it is locked up near the staff room!Which is easier said than done as 'technick' (yes our technicians name is nick) is usually hiding in the sculpture room at the other side of the building!
I'll post pictures of my work when its done.