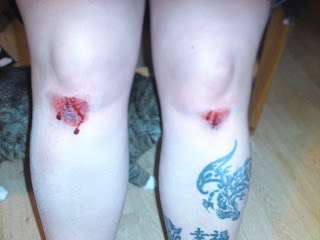 I was in so much pain when I woke up this morning, hardly slept last night cos my knees are so sore from my minor accident last night. I decided to attempt to have a lie in. It didn't work! I got up and cleaned my babies den out. They love it! I had to try and get it done quick cos my knees wouldn't let me bend down for that long! My lovely friend told me to go see her so she could patch me up a bit. That was nice, she got some hot water and iodine, and wiped them and let them dry. She did joke and say I look like a 7yr old! Lol, funny gal! That did make me laugh! I had to run back after a little while to meet Fia as she way down my way for a few days. I had the laziest afternoon I could, not wanting to move cos every time I did  move it was so painful.
This evening, after putting some iodine my lovely friend gave me on my wounds I watched the second have of a two part series called Everything and Nothing on bbc four, and learnt about what the definition of nothingness may be. It was talking about peoples theories and experiments for hundreds of years, it showed an experiment to determine whether light needs a substance to travel through, the same way sound needs air to travel. Sounds dull but I wanted to know what nothing actually was. Turns out even if you make a vacuum container, and remove all the air from it atoms and 'anti-atoms' form and then 'extinguish each other in less than a hundredth of a second. So really and truly there isn't ever a space with nothing in it.
Just watching everything now on iplayer. Don't think its as interesting, to me personally.
As mi man was out this evening it was nice to kick back and watch something I wasn't sure if he'd be interested in. I recorded some stuff for him anyways.
I think Obi realised I was in pain as he came and snuggled up on me, as usual, but he seemed to be different today, he fell into such a deep sleep I even got a few tiny little snores out of him! So beautiful! When he woke up he stretched and rolled right over on his back, between me and the sofa, and layed there with his feet up in the air for ages! Was so cute I really wish I could of filmed it!
When mi man finally came home I made him some spaghetti on toast and when straight to sleep, was so hard trying to sleep with my sore knees!